The last two weeks were rather busy in all respects, this is why I had no time to update this blog.

On 2 October we made a quick trip to Hegyeshalom again. We had 2 vans this time. Our vehicle was full of clean blankets that had been used in Röszke in the height of the chaos there in August, some volunteers later collected and shipped them back to Budapest, and got them cleaned. It was one of Anna's Migration Aid contact who stored them in her house in Budafok until I lifted them. The other van was driven an by a hilarious Romanian gentleman, Valentin and his Northern Irish wife, Lindsey. They brought survival packs, drinks and food. Yulia accompanied me this time. The trip was rather uneventful, we arrived in Hegyeshalom in the evening, didn't see any refugees as they were expected at midnight. We unloaded the vans, talked with the volunteers and returned.

The following week, starting on 5 October was rather hectic. Earlier I had delivered a vanful of clothes to Anna's place to Érd. She had the patience, time and stamina to sort and select them with Rachel in her basement. She did several shopping trips that week: food, muesli bars, bananas, bread, biscuits were purchased as well as socks and 60 pairs of brand new shoes from Decathlon. She also managed to find a contact in Northern Croatia, in Osijek. Finding the time for the delivery was rather troublesome, we planned the journey for Friday, but we only managed to go on Saturday afternoon with the food, clothes and shoes.

Our contact in Osijek was Elvis, which gave me a special delight. Since his tragic death in 1977, I had tended to side with the pessimists, saying the the King was gone forever, this is why I was somewhat taken aback when Anna forwarded me his address and Croatian mobile number. Naturally, my hand was slightly shaking when he returned my call.The famous deep voice is gone, as is his gentle Tennessee accent, instead it sounded like younger man's voice in a typical Slavonic, Eastern European accent. Nevertherless, the King was excited to hear about our coming and was looking forward to meeting us soon. Needless to say, the excitement was mutual: how often does a simple Hungarian have the chance to encounter with the singer of Heartbreak Hotel?

The M6 motorway was virtually empty, we reached the Croatian border in no time, at the border crossing station we had the chance to wonder at the inherent beauty of the latest sign of the infamous Hungarian hospitality: the 3-metre-tall fence combined with bladed wire. You should know though, that the Hungarian Government has been forced to look for a new supplier, as the German company supplying it so far refused to sell any more wire to Hungary, saying that their product was against criminals and was not to be used against innocent people trying to save their lives. I respect them for saying that, especially because they lost a 500,000-Euro business with this brave stand.

On the Croatian side we met a 10-bus convoy full of refugees heading toward Hungary.

We arrived at a small town house in the outskirts of Osijek at 4.30 in the afternoon. A lovely young lady received us, saying that Elvis would join us in a few minutes. My palms went moist with anticipation. It was a pleasant surprise, obviously, the King had undergone a series of facelifts, and had managed to deal with his drug problems as well. The black hair and the make-up are the things of the past. He was now a friendly, handsome, bearded young man in his late 20s, his job was to coordinate the work of the volunteers of the nearby Opatovac refugee camp as well as doing night shifts when the paid workers are not on duty. So when refugees arrive at the Serbian-Croatian border at Bapska, they are taken to a camp with army tents in the town of Opatovac, then taken to Tovarnik from where they are bussed to the Hungarian border. The tents are cold and the refugees are given pre-packed food rations from the country's emergency reserves. There is basic medical care, but not enough clothes, shoes and food rich in energy. Rejoicing over Elvis successfully reinventing himself, we parted with our Croatian host with friendly promises of meeting again soon.

On the way back we made a detour to Beremend crossing station to see the situation there. We were held up for over half an hour as the convoy we had seen previously had just reached the border. The refugees were sitting on the bus looking in the gloomy afternoon rain. On the Hungarian side we passed the tent of the Hungarian Interchurch Aid who were putting out water and apples for the refugees.

As the mediahype about refugees is slowly calming down, we are inclined to think that the present situation will soon be over, I myself was thinking that soon I should return the van to Roelof, and turn my attention to other things. It was a kind of surprise then when Anna contacted me yesterday at midday that an urgent delivery is needed to Hegyeshalom, to the Hungarian-Austrian border. One would think that Hegyeshalom is the place where assistance is needed the least, as refugees are just about the enter the Canaan, called Austria, Unfortunately, this is not the case. As I undertook to to do this delivery last night, I had a little chance to chat with the enthusiastic volunteers of Migration Aid Keleti, who filled up the van with water, cheese, bread, biscuits, bananas, apples, milk and clothes. I was told that even Austrian volunteers tend to come over for supplies to the Hungarian side, as the people are coming in such large numbers, that it is getting ever harder to meet their needs. Seven trains arrive at the border every day, each loaded with at least 1000 refugees, who haven't eaten for over 15 hours. Once they are put on a bus in Croatia, they are given no supplies, and when they are hastily herded over to Hungary at the border there is no chance of getting any refreshment, not even for those who have money, as the police does not let them stop at the kiosk. On the Hungarian side the are to board the trains as quick as possible, and volunteers are not always allowed to contact them. Even if they are, this is limited to allowing the volunteers to hand food in through the train windows. The other problem is that the toilets are often closed on the trains, and I would leave it to your imagination what a train might look like after 1000 people spend over 12 hours and they are denied toilet facilities... 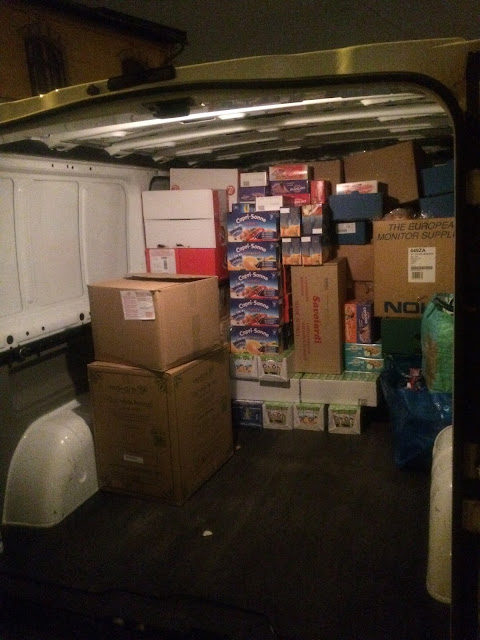 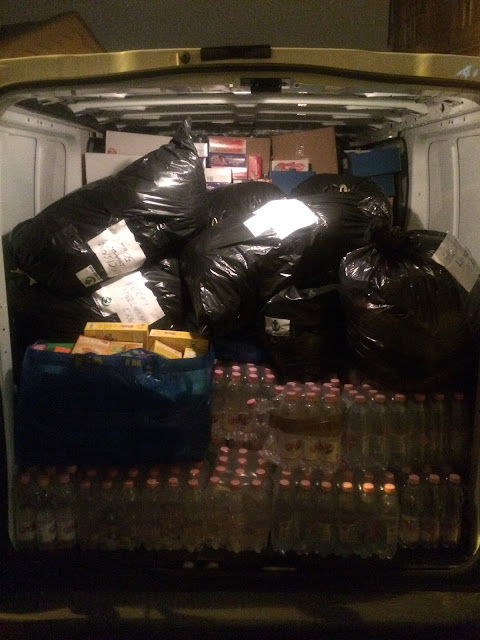 I was received with relief in Hegyeshalom and was told that the supplies I had brought would certainly get them through the rest of the night. What about tomorrow? Nobody knows...

After this quick, unexpected trip I got home at 1.30 in the morning, fully convinced that this crisis is far from being over. Moreover, it is getting worse. Last night it was 2 degrees celsius at Hegyeshalom, just over frost point. I was told that more and more people, especially the children are sick. The enthusiasm and supplies of Germany and Austria are beginning to be running out. It is getting harder to house the people.

This is not the time to think about quitting. We need your support more than ever.
Bejegyezte: Unknown dátum: 4:41